How to generate ideas and solve problems

Brainstorming is a technique, developed by an American Advertising Executive, Alex Osborn in the 1930s. It is based on what we know of the brain’s physiology and operation. The latest thinking in neuroscience has poo poo’d the idea of a strict demarcation of function between the right and left hemispheres of the brain as it has been found that both sides are involved (in different ways and to differing degrees) with almost everything we do or think. However, I’m going to use ‘right = creativity’ and ‘left = objective rationality’ as a sort of shorthand for the different mental processes of generating ideas and evaluating those ideas.

Regarding the ‘left brain’ approach to evaluation - we are very good at spotting the weaknesses in our ideas pretty much straight away. This can become a powerful habit, with the left brain happily trashing every idea the right brain can throw at it. We have an internal monologue repeating ‘that’ll never work’ and before we know it, we’ve ‘run out of ideas’. In fact, the right brain has just become dispirited and given up! Plato told us that ‘necessity was the Mother of Invention’. Well then that makes ideas into infants and your left brain guilty of infanticide many times over, as it has snuffed out new born idea after new born idea!

This isn’t just an internal process - it is something that happens when groups of people come together to discuss an issue or a problem. Teresa Amabile, Professor of Business Administration at Harvard Business School has asserted that ‘people believe that they will appear smarter … if they are more critical … In many organisations it is professionally rewarding to react critically to new ideas”.

Osborn spotted how ideas were often killed in meetings before they had a chance to develop. He developed four simple rules to ensure that all ideas were able to survive long enough to ensure proper debate and evaluation. These were:

1 Criticism is ruled out and judgement withheld until later. 2 Wild ideas are welcome. 3 Quantity is more important than quality. 4 Combination of ideas is good; in other words, building on and developing other people’s ideas is just as important as coming up with new ones of your own.

In ‘The Power of Creative Intelligence’ Tony Buzan outlines the idea of Radiant Thinking. This idea is similar to Mind Mining, with one crucial difference - it offers a visual and tangible ‘map’ to ensure that your ideas are more systematically identified and captured. The fact that the technique helps us actually draw a map of our developing thoughts is vitally important to its effectiveness. In ‘Thinking Skills and Eye Q’, Caviglioli, Harris and Tindall assert that because of the central role sight has played in our survival and success as a species, we are hard wired to learn visually. ‘Show me’ rather than ‘tell me’ works better for most of us … ‘when people can see what they are thinking, they immediately become better thinkers’ say the authors. And that is what radiant thinking does. It shows us the map of our ideas as they develop, stage by stage. In so doing it gives clarity to the relationships between facts, ideas, issues and so on, and allows us to free associate to look for answers or solutions. An example of radiant thinking, wherein one starts with a single idea and then adds associated ideas can be found below. I tried this with a small charity working in London which needed a basis to begin looking for new ways to fundraise.

Start with a single idea, let’s say ‘Fundraising’. This is the Primary Concept. Create a figure with the word in the middle, so: 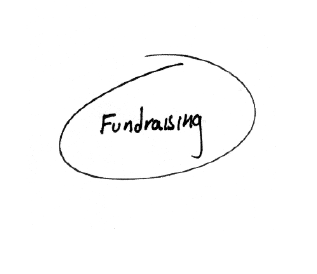 Radiate 5 ‘spokes’ away from the core idea, and write an associated idea along each of these. These each represent a Secondary Concept. For example: 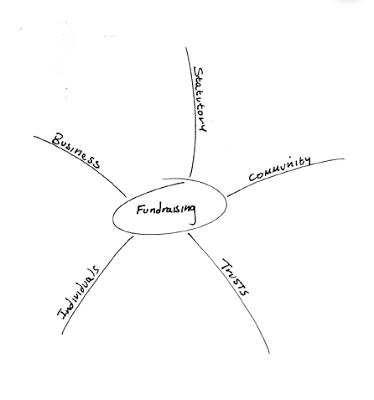 Next take each of the secondary branches and radiate 5 (or so) sub spokes from each of these. Place ideas that you associate with the Secondary Concept along each of these branches. These are the Tertiary Concepts. 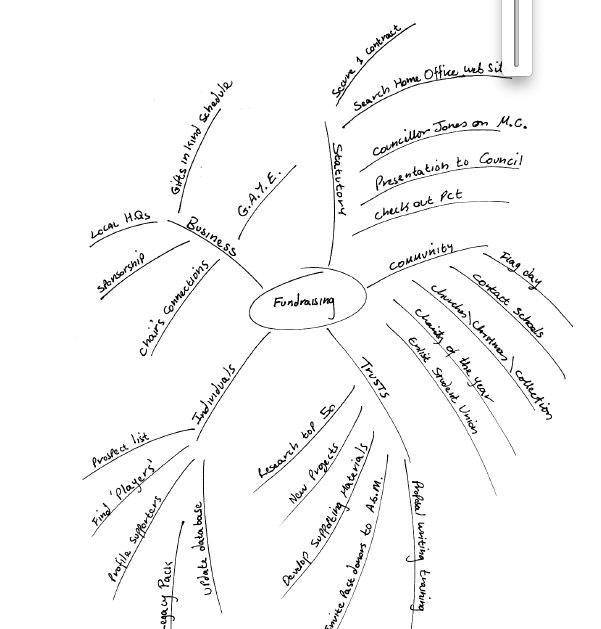 This is a really quick way to exploit your mind’s natural ability to build connections and ‘map’, in quick succession many ideas. The three step sequence above took only a few minutes and yet produced 30 Tertiary fundraising ideas for further discussion. Specifically, the ideas looked like this …

Run a flag day. Contact all local schools. Ask local churches for Christmas donations Get adopted as charity of the year by one major local employer. Enlist Student Union in fundraising activities.

Below you can see a Mind Map designed by a delegate on a time management course run by the author. 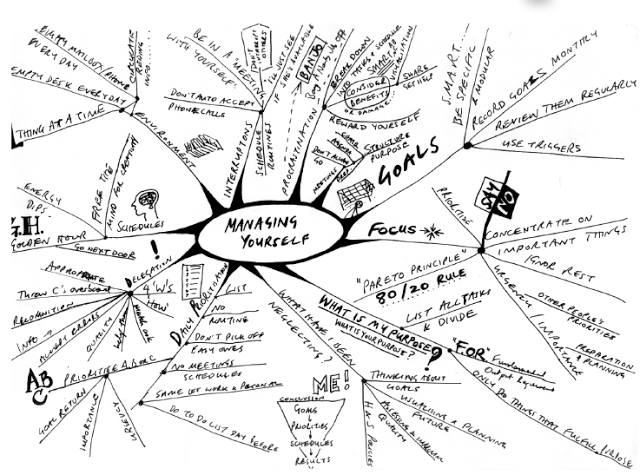 Variation on a theme - Mindwriting

This idea is based on the Crawford Slip Method, first developed by C.C. Crawford at the University of Southern California in 1925. The key difference is that participants are asked to make contributions in writing instead of verbally.

This has a number of advantages:

Hope you found this helpful and interesting!!